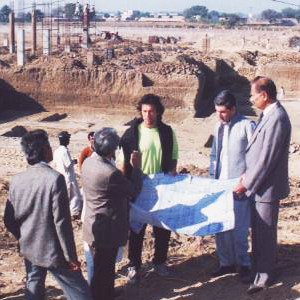 Shaukat Khanum Memorial Cancer Hospital and Research Centre (SKMCH&RC) is a state-of-the-art cancer centre located in Lahore, Pakistan. It is a project of the Shaukat Khanum Memorial Trust, which is a charitable organization established under the Societies Registration Act XXI of 1860 of Pakistan. The institution is the brainchild of Pakistani cricket superstar, Imran Khan. The inspiration came after the death of his mother, Mrs. Shaukat Khanum, from cancer.

Imran Khan made a nation-wide appeal for the collection of funds from a match between Pakistan and India on November 10, 1989 at Gaddafi Stadium, Lahore which raised Rs. 2,902,600. This was followed by a series of more than 50 successful fund raisers held throughout the world. Pakistan’s win under Imran’s captaincy in the 1992 cricket world cup in Melbourne helped fundraising efforts. He was able to collect one and a half million pounds in just six weeks after the World Cup when the same amount had taken 2 years to collect earlier. He donated his entire prize money of 85,000 pounds for the project. In 1994 when the project required more financing for the ongoing construction, Imran Khan launched a mass contact campaign in which he toured 27 cities in the country and collected Rs. 120 million. During the entire campaign for the construction of the hospital, over a million individual donors from ordinary citizens to the rich and famous pitched in. Everything from cash to jewelry and valuables was donated.

Making of the Hospital

Dr Nausherwan K. Burki MB, PhD, FRCP, FCPS, FCCP developed the Master Plan for the Hospital in 1990, while he was Professor of Medicine at the University of Kentucky, USA. He oversaw the building of the Hospital, which was designed by Graham Rapp of Arrasmith, Judd & Rapp, Architects in Health Planning, Louisville, Kentucky, USA. Design details on site were handled by Messrs. Nayyar Ali Dada & Associates of Lahore. Local engineering was performed by Messrs. Progressive Consultants, Lahore. Ground was broken in April 1991 and the hospital opened its doors on December 29, 1994.

Dr Burki was the first CEO of the Hospital until September, 1996, while on sabbatical leave from his University. He was responsible for recruiting all the consultant/attending medical staff and senior nursing and administrative staff. He remains the Chief Medical Advisor and Member, Board of Governors, continuing to be involved with program development, quality control, and recruitment of consultant staff, as well as Professor of Medicine at the University of Connecticut Health Center, in Farmington, Connecticut, USA.

WEBINAR: Breast Radiotherapy in a Week, Fast-Forward to Implementation