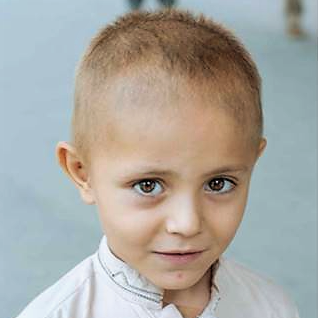 “Abu Hurera is our only son among three daughters and is very special to us. He was four years old when he developed fever, which would not get better. This was of special concern to us because some years ago, my daughter had similar symptoms and ended up being diagnosed with cancer. I distinctly remember the long period of uncertainty during which I was paralyzed by fear and I could focus on nothing other than my son’s possible cancer diagnosis.

Unfortunately, my worst fears came true. I was heartbroken when the doctors confirmed that my son had blood cancer. We rushed to Shaukat Khanum Memorial Cancer Hospital and Research Centre (SKMCH&RC) from Kohat – throughout the journey, I held on tightly to the glimmer of hope that tugged at my heart as I thought about my daughter’s smiling face, a cancer survivor treated at SKMCH&RC.

I was very relieved when Abu Hurera was accepted for treatment, free of cost, at SKMCH&RC. Although I had to close my shop for a few weeks to be with my son, I knew that I would not have been able to help my son fight cancer without the help of SKMCH&RC. The Hospital took care of my son using the best available treatment just as a parent takes care of his child – and we were treated completely free.

We had to accept that when other children his age would be celebrating their first day in school, Abu Hurera would be undergoing his first chemotherapy session. During treatment, he stayed in high spirits and bravely fought cancer with a smile on his face. If he got upset, a toy cheered him up but he still missed his friends in our home town. He was absolutely delighted when he made a new friend during his treatment, a little boy who could speak our language and who could also share his moments of joy and pain. When his friend completed treatment and was going home, Abu Hurera was very upset. I had to explain to him it was a special moment worthy of celebration because his friend was going back after defeating cancer and that soon, with the grace of God, he too would go back to his home.

Today, I am grateful to God and all the supporters of Shaukat Khanum Hospital who helped my little boy defeat cancer.  I pray that Abu Hurera gets an opportunity to reach his full potential because, like every other child, he deserves the best in life.”