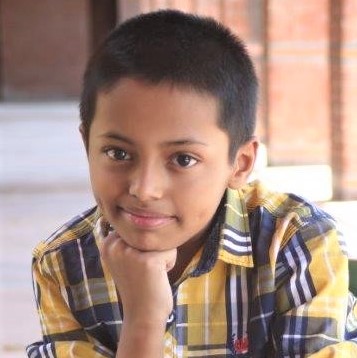 “Every time my one and only son Asad has to choose a toy, he picks out a superhero figure. Thor is his current favourite. He is 10 years old and in his short life, he has himself displayed great strength, endurance, and resilience—all the characteristics of his favourite superhero. He also says that he has seen superheroes very closely, not those wearing capes, but those who wear white coats. They are the medical staff of Shaukat Khanum Memorial Cancer Hospital and Research Centre (SKMCH&RC) who help children like Asad every day in fighting and defeating cancer.

In 2011, I was working in Faisalabad as a software engineer. My son was a very active 4 year old at that time. Suddenly, he developed fever and started losing weight. As his fever failed to settle, we took him to several doctors – one thought Asad had malaria – but no one could diagnose him correctly. For three months, his unknown ailment kept weakening my son and we felt utterly helpless. Finally, a doctor realized that Asad’s platelets were extremely low, almost undetectable, and suggested we get his bone marrow biopsy done.

When the test results came back, it was as if the world turned upside down and darkness descended heavily on our spirits. Asad was suffering from acute lymphoblastic leukaemia, a type of blood cancer.  We decided to seek treatment as soon as possible and discussed options with doctors and our family. Everyone agreed that we should take him to SKMCH&RC in Lahore. Hope mingled with despair as we made the journey to SKMCH&RC. It is difficult to describe the feeling when you are holding your child, trying to touch their hand and hoping the warmth lasts forever, trying to memorize their smile and not knowing the next time you will see it. Asad, despite being so young, understood he was ill and was going to a hospital. He was young but brave.

The moment we walked through the doors of the Hospital, our hearts were filled with calm and a great sense of faith. This was  clearly not any ordinary place. It was a hospital where an impossible dream had been turned into a reality. Asad was admitted and after undergoing financial evaluation, I was told I would not need to worry about the finances because the Hospital would ensure that Asad got all the treatment he needed.

I was amazed after seeing SKMCH&RC, because I did not think a Hospital of such high standards, which treated all its poor and deserving cancer patients for free, could exist in a developing country like ours. Asad’s active treatment lasted for nearly three years and the clinical staff was always there for us, helping us to stay strong for our son. His mother was constantly by his side but that meant she had to leave our one-year-old daughter with her sister.  This was indeed a very difficult period for us but we held on to our faith and prayed to God until we ran out of tears. Gradually, we started seeing the positive impact of treatment and eventually, his strength prevailed against cancer.

Even undergoing weekly chemotherapy could not stop Asad from going to school. The Hospital’s Schooling Program helped him keep up with his schoolwork. Today, he is in class 4 and doing well. He hopes to join the Pakistan Army when he grows up, and we certainly want him to follow his dream and to serve the country, just as Shaukat Khanum Hospital has been serving and saving poor cancer patients for nearly twenty-five years.”